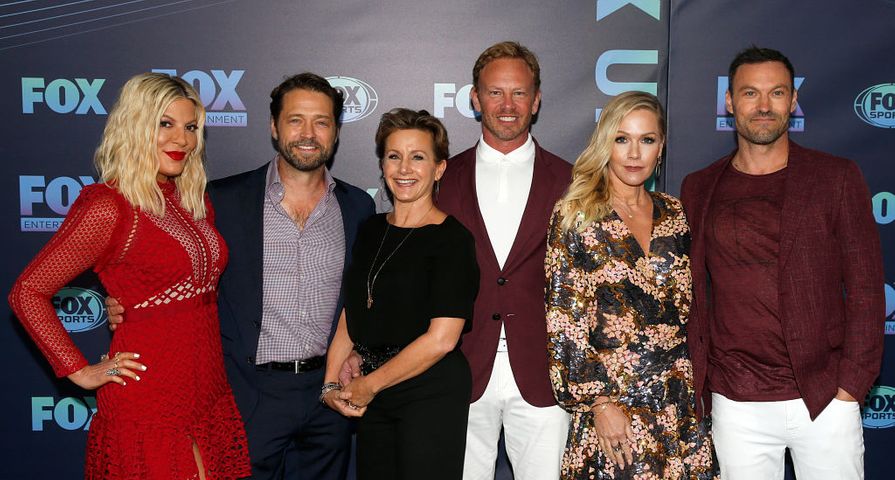 The return of Beverly Hills, 90210 had been in the Hollywood rumor mill for years, but in 2019 Fox delivered the news that fans wanted to hear for years: the show was coming back…in a way. The new Beverly Hills, 90210 series BH90210 isn’t exactly a reboot or a revival, and is much different than most other series that have been recreated in recent years. With a huge twist and big changes, here is everything you need to know about BH90210:

After several hints and rumors, Fox announced that they were creating an all new Beverly Hills, 90210 on February 27, 2019. The network confirmed that original stars Jason Priestley, Jennie Garth, Ian Ziering, Gabrielle Carteris, Brian Austin Green and Tori Spelling were all on board. They also released the first description for BH90210 which revealed a big twist: “The core cast will all play heightened versions of themselves in a brand-new serialized drama — with a healthy dose of irreverence – that is inspired by their real lives and relationships. Having gone their separate ways since the original series ended 19 years ago, Jason, Jennie, Ian, Gabrielle, Brian and Tori reunite when one of them suggests it’s time to get a Beverly Hills, 90210 reboot up and running. But getting it going may make for an even more delicious soap than the reboot itself. What will happen when first loves, old romances, friends and frenemies come back together, as this iconic cast — whom the whole world watched grow up together — attempts to continue from where they left off?” 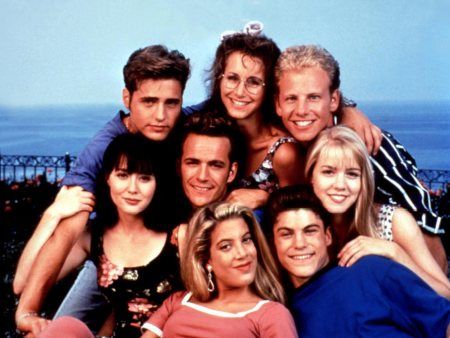 It did not go unnoticed that two of the major original stars were not tied to Fox’s announcement: Luke Perry and Shannen Doherty. At the time of the announcement Fox said that they had left the “door open” for the two stars to get attached to the project. After Perry’s untimely passing it seems Doherty changed her mind on not taking part and signed on to the series nearly two months after Fox’s announcement. Doherty took to her Instagram to share a throwback picture of the stars from the early ’90s and wrote, “Yes it’s official. The real question is…. will we still be rocking those outfits. #bh90210.” 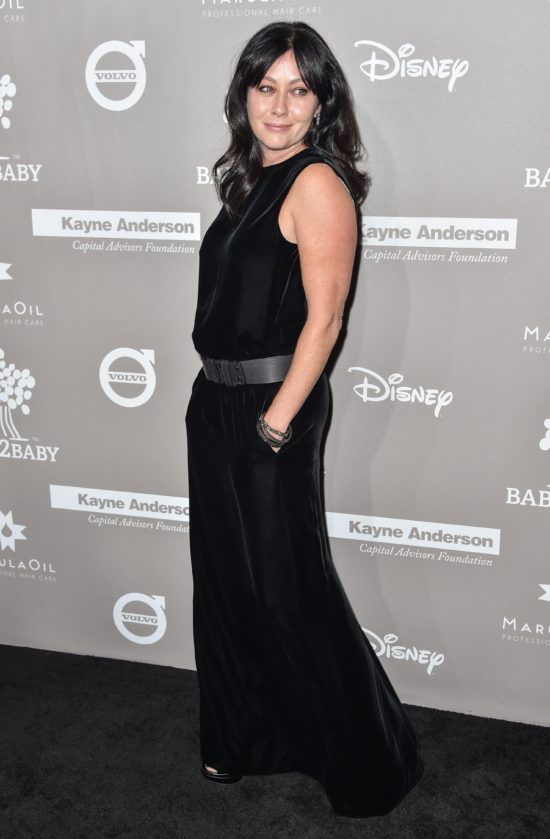 As BH90210 becomes a reality, many are most upset that Luke Perry’s death came before he had the opportunity to take part, even in a small way. In a case of unfortunate timing, only one day after Fox’s big announcement about BH90210, news reports revealed that Perry had suffered a massive stroke in his home on February 28, 2019. Hollywood and fans around the world were devastated when Perry passed only days later on March 4, 2019. While he wasn’t signed on to BH90210, it seems his passing is what might have encouraged Doherty to get involved in the new series. It has also been confirmed that the cast will address the loss of Perry in the show in some way. “Luke’s tragic passing will be acknowledged in some way since he won’t appear alongside his longtime friends on the show,” an insider said. Meanwhile Gabrielle Carteris added, “We’ll definitely tilt our head to that, but I think that we don’t want to go and in any way try to glorify that to make our show successful. And I don’t think Luke would want that. So, we’re going to do it in a very respectful way,” she said. 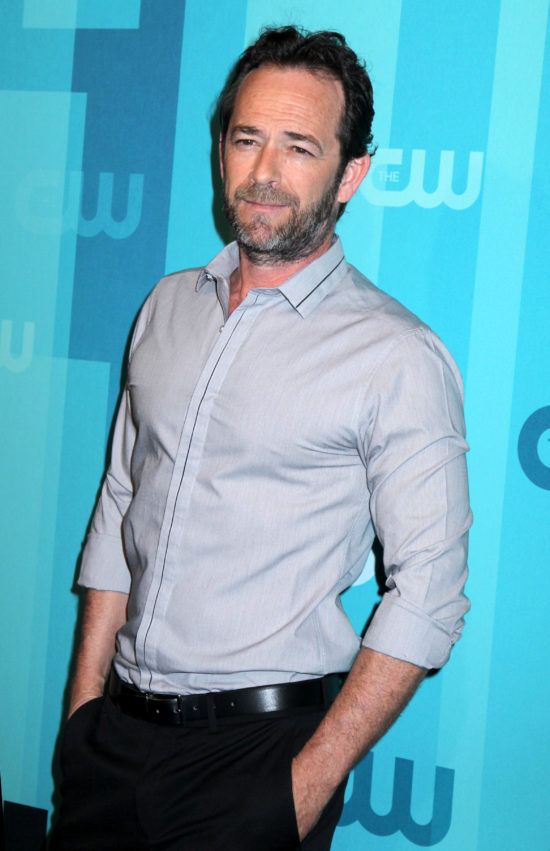 Jennie Garth and Tori Spelling not only wanted to be involved in bringing BH90210 to fruition, but are the people that actually spear-headed it! “Jen and I co-created it with Chris Alberghini and Mike Chessler. I mean, I don’t know if it’s art imitates life or life imitates art — but we have had a close friendship, she’s one of my best friends, for 30 years,” Spelling said. 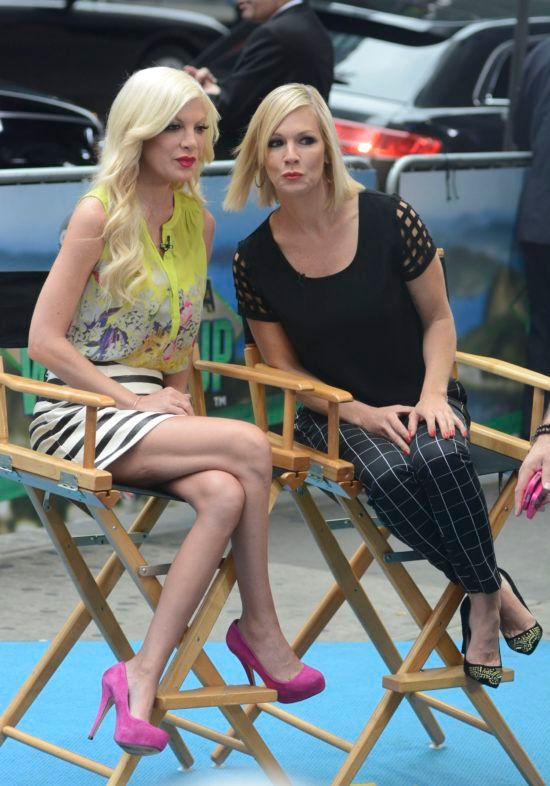 Many fans are well aware of the off-screen drama and controversies that plagued the original Beverly Hills, 90210 and it seems that even though nearly 20 years have passed, little has changed in that regard. In mid-May as production was kicking off on the show it was reported that BH90210 shorwunner Patrick Sean Smith and several senior writers quit the show on Thursday, May 16, which happened to be Tori Spelling’s birthday. Jennie Garth alluded to the shakeup on social media when she shared a post to celebrate Spelling’s birthday that day. “Happy birthday to my partner and best friend for life. Wow, we’ve been thru some s*#t!” Garth wrote. “And today was no exception! Hope you enjoyed your glamorous birthday dinner!! I love you #tbt #happybirthday.” Reports were conflicting about what the reason for the massive exit was with some stating it was an issue between the writers and two of the show’s leading actresses and another said it was between the writers and an executive. Interestingly enough Garth and Spelling are both leading actress as well as co-creators and executive producers which means all signs are pointing to the pair or one of them being at the center of the early off-screen drama. 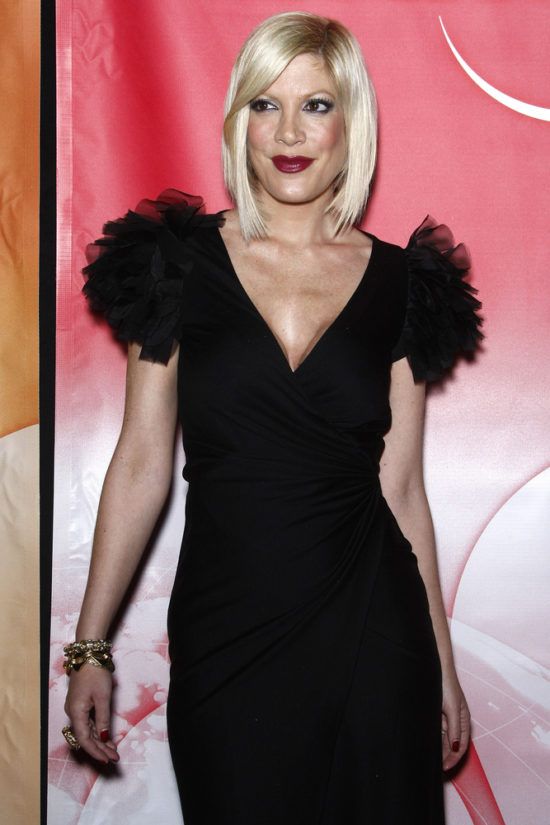 While Beverly Hills, 90210 fans were ecstatic to hear that Fox was bringing back the iconic series, they haven’t been as thrilled about the huge twist. Instead of playing their iconic characters, the actors are playing “heightened versions” of themselves and are dramatizing their real lives for the show. Naturally, many are confused by this “twist” and Garth and Spelling attempted to explain it. “The premise of this show, it’s about the characters behind the characters. It’s inside the lives of people that lived in those shoes for those 10 years, and it’s about them coming back together,” explained Garth. “I think definitely everyone was wanting to poke fun at themselves and poke fun at the image that other people have of them,” Spelling shared of these “heightened versions” of themselves that they are portraying. “Jennie Garth and I were like, ‘What would be something fun?’ and so we decided what would it be like if an entire ensemble cast played themselves,” Spelling added. “There’s been shows like Curb Your Enthusiasm’ episodes where it’s heightened versions of people playing themselves. This is the first time an entire cast will be playing heightened versions, so people would be going, ‘What’s fictional, what’s not fictional?’” Of course with the series being about the actors reviving Beverly Hills, 90210, fans will see their characters, as they step back into the roles for the show within a show. “[It will be a] blend about doing the behind the scenes of a reboot, so don’t worry — all the fans will get to see scenes within scenes so they won’t be disappointed. They’ll see [the characters] Donna and David, but they’ll also see [the real people], Tori and Brian and Jennie and everyone else,” Spelling said 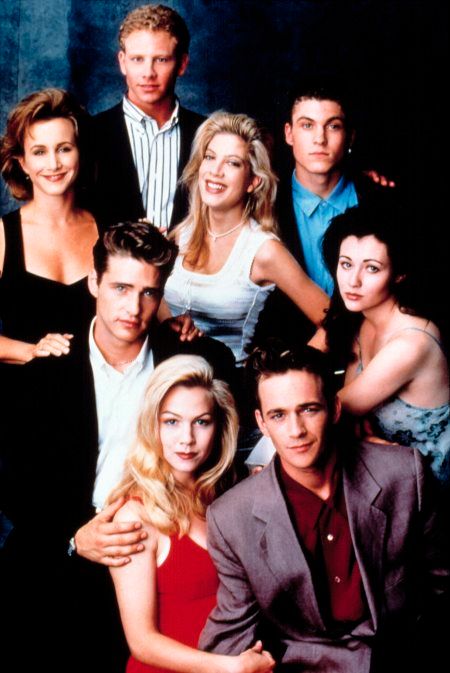 6. Who Is In Control

When it comes to bringing back an iconic series, most stars only sign on if it is being done exactly right, and in order to ensure that was the case for BH90210, they all became executive producers for the series. “We’re involved in everything from set design to wardrobe to lighting, everything, it’s all kinda sorta under the same umbrella,” Garth exclusively told Us Weekly. “I think it’s really important, the whole cast is on as producers now and it’s what’s gonna make the show authentic. … We were there and we have a certain level of passion for it that I don’t think somebody else might have, and that’s hopefully gonna be evident in the final product.” 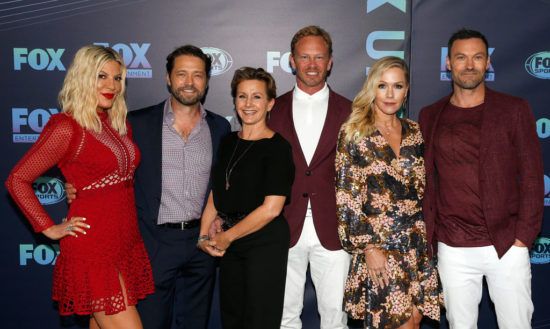 Although BH90210 might be more about the cast’s fictionalized lives than their iconic characters, that doesn’t mean fans aren’t going to be taken back to classic Beverly Hills, 90210 locations including The Peach Pit. “We’re working on a location right now for our new version of the Peach Pit. You’ll be seeing the Peach Pit,” Jennie Garth confirmed to EW about the iconic spot. Spelling then joked that they should create a “Peach Pit Senior Center.” 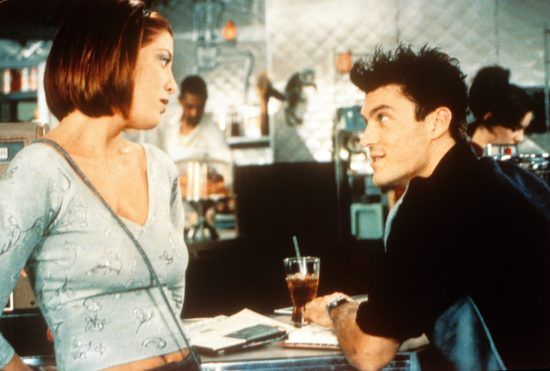 Along with all the familiar faces returning for BH90210, there are some new faces joining the crew! Since the stars are portraying “heightened” or fictionalized versions of their lives, it looks like their real spouses won’t be taking part, so some had to be cast! It has beeen confirmed that La La Anthony has been cast as Brian Austin Green’s wife, named Shay. According to her character description Shay is a hip-hop/pop superstar who “makes the money” while Green stays at home with their three kids. Of course, this is an extension of Green’s real life relationship with his wife, actress Megan Fox, who has been working more over the past decade while Green has stayed home with their three sons. Vanessa Lachey will also be joining the series as Jason Priestley’s wife. Lachey will play Camille, a PR executive who struggles with her work/life balance as she and Priestly try to start a family. In real life Priestley has been married to make-up artist Naomi Lowde since May 2005. The pair have welcomed a daughter and a son. Meanwhile Ivan Sergei has been tapped to play Tori Spelling’s husband, Nate, who is an ex-hockey player who wants to be a professional sports announcer. In real life, Spelling is married to Dean McDermott with whom she shares five children. 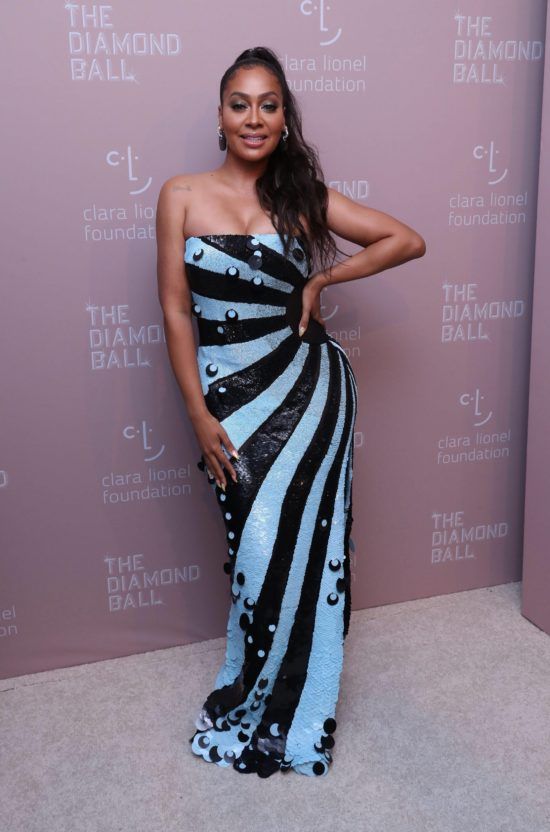 In paying tribute to the original series, BH90210 will keep the beloved theme song. “The music we used and the credits we used — so [fans] get a little bit of both,” Tori Spelling told Entertainment Weekly. 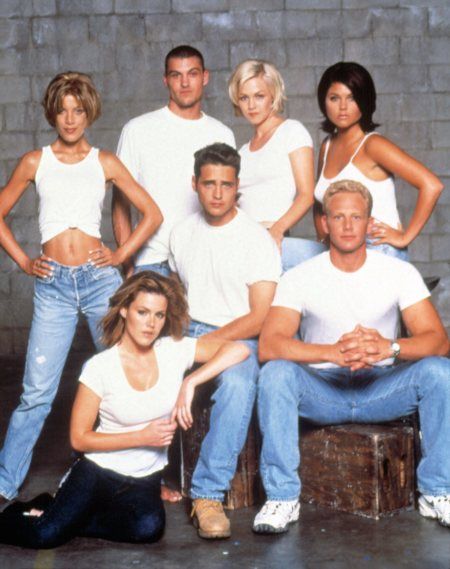 With much of the original cast starring in the series, BH90210 will bring some other familiar Beverly Hills, 90210 back to the small screen according to Jennie Garth who teased that there will be some “fun” cameos for fans of the original series.  “We’re gonna have fun with that over the course of the first season, for sure, and subsequent seasons, but you’ll just have to keep your eyes peeled for recognizable faces,” she teased. “We’re gonna do a lot of show references, a lot of eye candy for the people that were fans of the original show … being like, ‘Oh, my God, that’s the dress!’ or ‘That’s what they said in the episode!'” 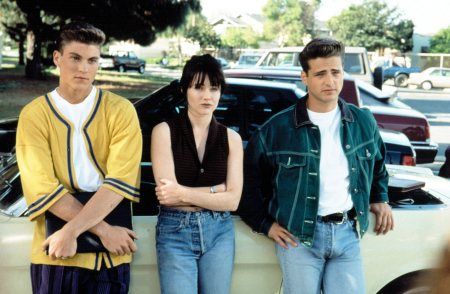 BH90210 began filming in Vancouver, British Columbia in early spring 2019 and production is looking at a quick turn around time because BH90210 will premiere on Fox Wednesday, August 7, at 9 p.m. ET. There is a lot of anticipation about the new series, but fans will have to act fast! The series will only have a limited six episodes.