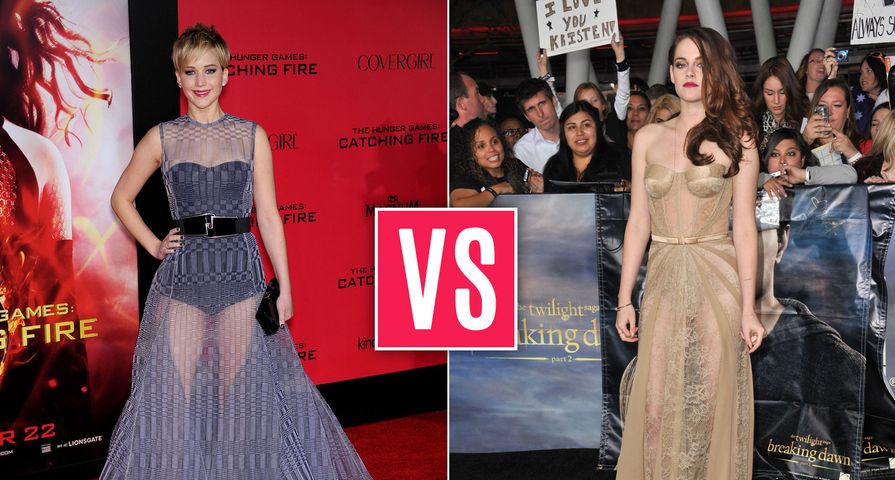 These celebrities that we’ve selected for our fashion face-off are all in competition with each other in one way or another. Some of them have dated the same man (and some of them still fight over him) while others are rivals in a professional sense. Some of them have made it clear that they hate the person they feel is their competition; however, other rivalries seem as though they were created by the media. For some reason, our culture just really likes it when two beautiful and talented women are too jealous of each other to be friends. We want to see how this competition plays out on the red carpet – tell us which star has better red carpet fashion!

LeAnn Rimes and Brandi Glanville have a couple of things in common, the big one being Eddie Cibrian. Glanville was married to him when Rimes began a torrid affair with him. Ever since Cibrian ditched his wife and married the country singer, these two have been duking it out on Twitter and on the red carpet. Who do you think is more stylish in these photos?

Who knew that Katy Perry and Taylor Swift were rivals! While the country singer-turned-pop-star says that the rivalry is strictly over professional matters, we can’t help but think it is over John Mayer, as they both dated the notorious womanizer in quick succession. Which singer do you think rocks a better crop top and skirt?

The only thing these two actresses really have in common is Ryan Gosling. We all wish he would get back together with Rachel McAdams, but he seems pretty committed to Eva Mendes. McAdams is obviously the better actress, but do you think that she has the better flowing gown?

These two claim that there is no bad blood between them, but we’re not entirely sure we believe that. Beyonce and Kim Kardashian are both really curvy and neither one of them is known for being particularly stylish. Which outfit do you like more?

Fame10 Power Couple Face-Off: Which Star is Worth More?

After they both rose to fame thanks to “The Simple Life,” these two childhood friends grew apart. At one point, Paris Hilton was more famous and successful; however, the tables have turned and now Nicole Richie is the one who is more in-demand. She has her own show, her own fashion line and a number of A-list friends. We can’t help but assume that Hilton is jealous of her former co-star. To keep the competition alive, who do you think rocks a better gown?

Celebrity Sisters Face Off: Who Is The Hotter Sibling?

We’re pretty sure these Oscar-winning actresses will never be friends even though they have something pretty big in common – Brad Pitt. Angelina Jolie and Gwyneth Paltrow are both incredibly beautiful with figures to die for; however, we want to know which one has the better yellow dress…

Celebrities and Plastic Surgery – You Be The Judge!

Everyone always assumed that Leighton Meester and Blake Lively were anything but friends. Meester was obviously the more talented one on “Gossip Girl,” but for some reason Lively seemed to get more attention, in spite of her wooden acting. Since they’re both incredibly hot and stylish, who do you think has the better minidress?

There has always been a rivalry between these two former Disney stars. Miley Cyrus was the bigger star for a while because of “Hannah Montana;” however, Selena Gomez’s star began to eclipse her former co-star’s when she landed her own show, “Wizards of Waverly Place.” Which actress-singer do you think has a better white dress?

Word on the street is that Kristen Stewart is pretty jealous of Jennifer Lawrence. While Stewart’s career has been slightly derailed because of her affair with the married director from “Snow White and the Huntsman,” Lawrence’s career keeps reaching new heights. On the red carpet, the competition between these two has reached a bit of a stalemate – they are both relatively fashionable but not exceptional. Help us decide: Who has the better semi-transparent dress here?