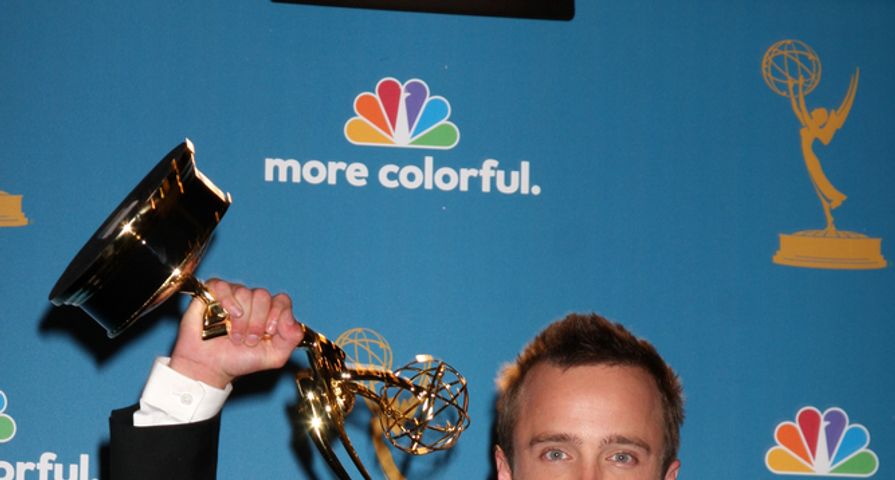 From the Sundance Film Festival to the SAG Awards, all in a day–that’s how Aaron Paul rolls.

Aaron jet set from Utah to L.A. to take the 20th Annual SAG Awards and brought a beautiful date to accompany him–his sister, Rachelle (sp). Aaron offered a candid interview to red carpet host, Ross Matthews, and showed off his Burberry tuxedo, as well as some loafer cut shoes that might have been better left for an Italian pimp.

That said, Aaron was in good spirits, looked and acted as if he enjoyed 10 cups of coffee before walking the red carpet, and was probably pretty excited about the additional hardware Breaking Bad collected throughout the evening. Bryan Cranston, took home the big award for Outstanding Performance by a Male Actor in a Drama Series. And the entire cast was awarded the honor of Most Outstanding Performance by An Ensemble in a Drama Series. It was another excellent night for the show’s swan song tour.

The SAG Awards took place on Saturday night in Hollywood, and it was another star-studded event highlighting the 2014 awards season. The SAG Awards are a special occasion, and carry significant weight for actors and actresses, as well as the many unsung stunt performers who make some of our favorite TV shows and movies so much more exciting. The awards are voted upon by the members of SAG-AFTRA, who comprise the professional peers of those nominated, as well as those inspired by and aspiring to the same level of success within the entertainment industry.

To enjoy Aaron Paul’s fun interview with Ross Matthews, check out the video below.