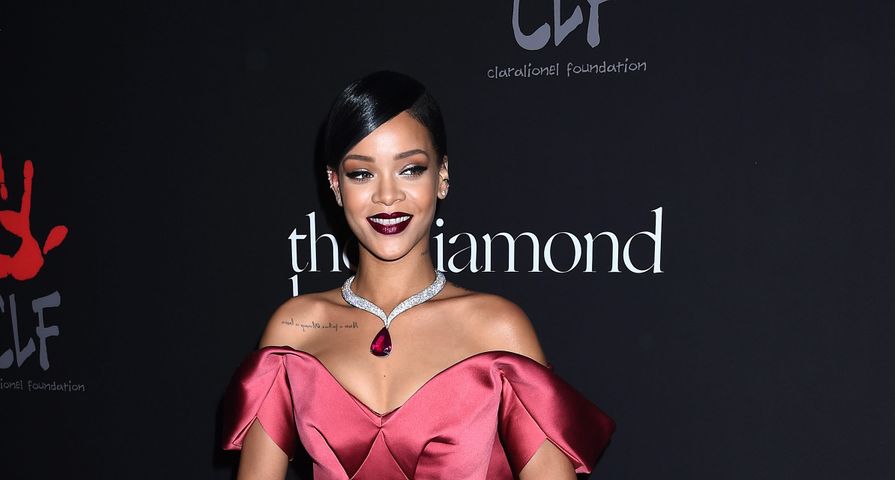 Brad Pitt and Rihanna are not a celebrity pair you would normally match up but the two megastars did come together for Rihanna’s first ever Diamond Ball charity event in Beverly Hills on Thursday (Dec. 11) night.

If you are going to host your first ever charity event and invite tons of stars you might as well be introduced by one of the most iconic (and hottest) around, “Brad Pitt loves charity, he loves giving back and it was just as simple as that. He was really honored to be a part of it, so I’m really happy he’s here,” Rihanna told E!News about getting Pitt to make her introduction.

However, unless they talked about it first, Pitt’s funny yet odd speech may not be what Rihanna had in mind before he let the 26-year old singer take the stage.

“Rihanna. Female phenom. Cultural icon. Provocateur. Advocate….and that voice,” Pitt started and then as a photo showing a young Rihanna from her childhood flashed on large screens Pitt stated, “I’ve often asked the very questions you yourself are asking right now, what the f–k went wrong? I give you exhibit A. Look at the young girl before you, all full of hopes and dreams, living a humble existence in Barbados, her whole life ahead of her,” he joked.

“And what happened? It’s not a pretty story. Like so many others, Rihanna landed on the unforgiving streets of New York at the young age of 16, and soon fell in with a bad crowd– a bad crowd led by the dubious nefarious character known as the Jay Z.  For those of you not in the know, the Jay Z was an evil impresario known for churning out hit records, and ripping insane lyrics and fresh beats. Needless to say it was all downhill from there.”

Pitt then continued his pretend mocking by downplaying all of Rihanna’s incredible accomplishments including, “54 million albums sold, 7 Grammys and 90 million Facebook fans.”

He then proposed that they stage an intervention as an image of the gorgeous star popped up showing her overweight, laying on a couch, and eating a sandwich.

“If we don’t act quickly and decisively and help this young lady find direction and purpose, I fear this will be Rihanna by this time tomorrow. I ask that we stand together, by her side, and show her our support and our love and say to her the hard words. Rihanna, put down that sandwich, get off your ass and do something. God damn it, just do something with your life. Thank you,” he concluded.

Pitt’s hand at comedy is obviously improving as the star-studded crowd were quite entertained by his speech and the event was a huge success as attendees included Kim Kardashian, Tyrese Gibson, Ellen Pompeo and Nikki Reed among many others.