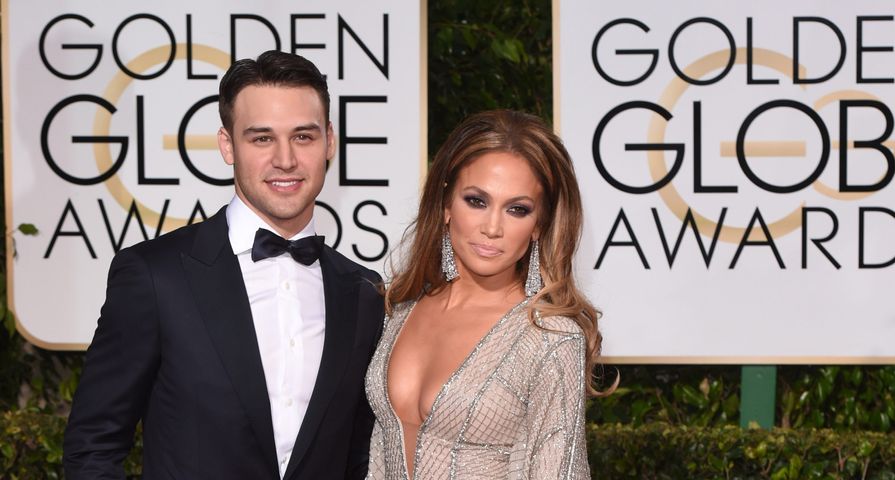 As per usual Jennifer Lopez, 45, looked absolutely stunning while attending the 2015 Golden Globe Awards, showing off her enviable body in a low cut gown with a high slit, but even more eye-catching then her attire was her arm-candy.

Even though rumors have been circulating that Lopez is once again dating ex-boyfriend and dancer Casper Smart, the actress arrived at Sunday’s event arm in arm with her The Boy Next Door co-star Ryan Guzman, 27.

In the film Lopez portrays a bored middle-aged housewife who is seduced by the good-looking teenager (played by Guzman) who lives across the street, but things turn violent when he becomes obsessed with her.

While Lopez stated filming the steamy sex scene with the young hunk was “uncomfortable” the pair seemed more then comfortable at the awards show and were even spotted partying the night away together afterwards at The Weinstein Company’s Globes afterparty.

As well as attending awards shows and co-starring in a film together, Lopez and Guzman will host a TV marathon of the true-crime original series Snapped on Sunday January 18, ahead of their film’s release on Friday January 23.

While the two may just be pairing up for publicity for the movie, it wouldn’t come as a surprise if they were dating as Jennifer Lopez is known for liking younger men.

“All the old clichés about women need to be undone. Enough already. We’re in the other position now. We are desirable older, we can date younger guys and it’s not this big taboo. Men have been doing this for years, and it’s no big deal,” Lopez previously stated in a December interview.

Also Check Out: 11 Celebrities With The Worst Taste In Men