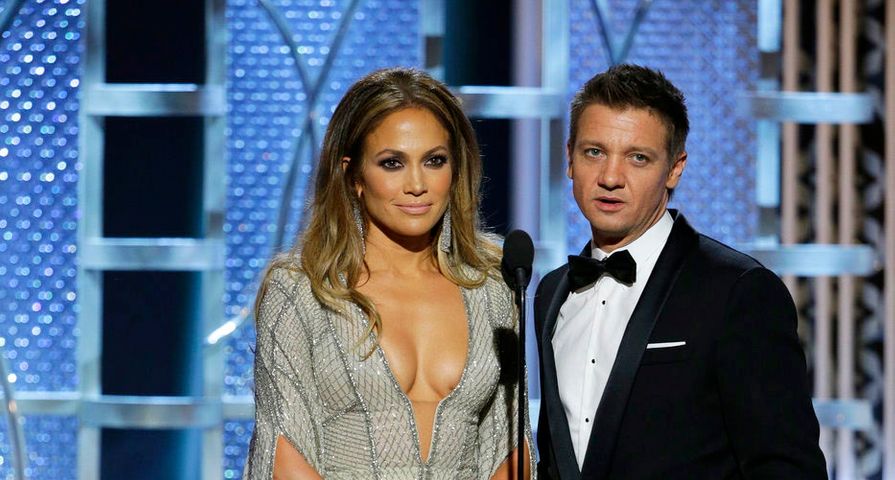 Now that all the fun and excitement of the Golden Globes are over, actors and actresses are having to take on the critics about everything from what they wore to what they did to what they said.

Although the awards show on Sunday January 11 was all in all very tame, there were a couple things that some viewers took offence to such as comedienne Margaret Cho’s North Korean character and Jeremy Renner’s witty one-liner.

As always, the event was full of the stars reading cheesy jokes off of a teleprompter they could barely see, but actor Jeremy Renner, 44, arguably had the best joke of the night with an unscripted comment about co-presenter Jennifer Lopez’s “globes” as she was wearing a very revealing gown.

When presenting together for the Best Actor in a Mini Series or TV Movie, J.Lo, 45, offered to open the envelope because she had “the nails,” and without missing a beat Renner stated, “You’ve got the globes too.”

While many found the quick comment funny, even J.Lo who laughed it off, others did not, posting on social media things like, “Jeremy Renner just sexually harassed JLo on live TV.”

On Monday (Jan. 12) the Avengers actor took to his own Twitter to respond writing, “A reminder not to take this shit so serious. Thanks Jennifer–You’re a gem.x #goldenglobes #hadtosayit #jlo.”

Being newly single – as his wife of ten months recently filed for divorce – perhaps there could be a romance between the two, as Renner has obviously taken notice of the gorgeous Jennifer Lopez.

Also Check Out: 7 Celebrity Men Who Consider Themselves Feminists

Check out Renner and J.Lo presentation below!