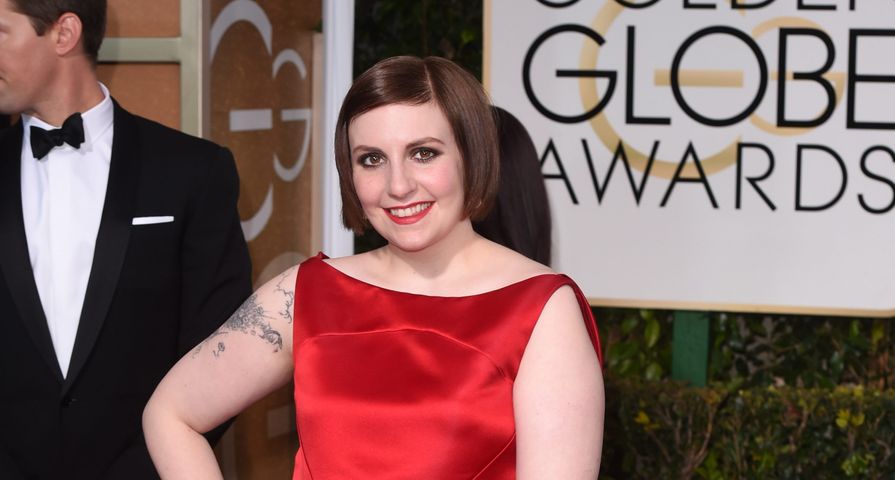 Outspoken Girls actress Lena Dunham, 28, is still very active on social media, in fact only hours before hitting the red carpet for the 2015 Golden Globe Awards, the show’s executive producer Jennifer Kronin posted an Instagram picture of Dunham wearing only pasties on her nipples.

Luckily when Dunham arrived on the red carpet she was fully dressed and did not have such an optimistic take on social media as she told Ryan Seacrest that she deleted the Twitter app from her phone to “create a safer space for me emotionally.”

Dunham spoke in response to Seacrest asking if she would be checking her phone during the awards ceremony because Girls Season 4 premiered on HBO at the same time as the Golden Globes.

While she is still on Twitter, she simply doesn’t have it on her phone anymore for her own well being, “People threaten my life and tell me what a cow I am,” she explained.

“I check it occasionally, but it’s just not the same co-dependence Twitter and I once shared.”  Dunham’s date, her co-star Andrew Rannells, added that Twitter “is a door to a whole lot of craziness.”

“The dark side of the internet,” Dunham added. “There’s a lot of people I love on Twitter, but unfortunately you can’t read those without reading deranged neo-cons telling you you should be buried under a pile of rocks.”

Early Monday morning, the actress clarified her Twitter usage to fans who were obviously confused because she is still on the social media site quite a bit.

“I deleted Twitter from my phone and sometimes send a tweet to a friend I trust to post if I’m out and about and wanna share,” she wrote. “We gotta create systems that make us feel safe. Sorry I confused you aka who cares.”

Also Check Out: The 10 Worst Dressed Celebrities Of 2014