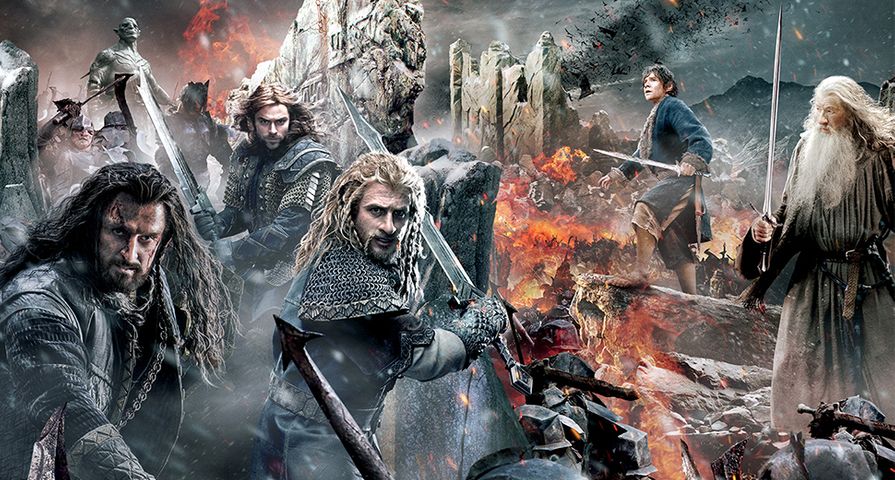 For fans of the J.R.R. Tolkien Middle-Earth saga, The Hobbit: The Battle of The Five Armies, will be sure to please. For those who aren’t fans, don’t expect the final film to convert you.

Please. Let’s get it out of the way, and briefly mention that this screen adaptation of The Hobbit should have been told in two films vs. three, but where is the money making ploy in that?

Fortunately, for true fans, Peter Jackson was involved in the process from point A to point F, and has neatly bundled a package of Middle-Earth films that run cohesively from The Hobbit to Return of The King.

Kudos to the filmmakers for the consistency in tone. Looking back, these films have been something of a winter staple at the box office for some 13 years. During the hiatus between The Lord of The Rings trilogy, and The Hobbit film trilogy, it is imagined that fans were snuggled into their blankets at home, watching Frodo and the boys doing battle vs. Sauron.

The Battle of The Five Armies picks up just where The Desolation of Smaug left off. It’s a bit of an awkward and clunky start if not watching the films in order, or not having seen the second film in a year’s time. Still, it doesn’t take long to reinvest in the world of Middle-Earth, or sympathize with the poor people of Esgaroth/Laketown.

The battle with Smaug is sublime, and sets the standard for what is to follow: A whole lot of warring parties preparing for an epic battle. And the film delivers, just as the story has since its publishing in 1937.

Considering The Nuts and Bolts

Yes, some magic was lost between The Lord of The Rings and The Hobbit film trilogies. There is a more obvious reliance on CGI from the get-go. Instead of considering the craft as a solution to a problem, it has become the foundation from which to build upon, sucking some soul from the project. It must be the trap of all filmmakers attempting to offer “prequels” to what have been considered masterful, precursory works.

Yes, in …Five Armies, this equates to an inevitable scene of Legolas defying the laws of gravity, while the relativity of gravity shifts mid-shot when animated via computer.

Side-note to CG FX specialists: Do more research on terminal velocity. I’ve yet to see one film that has mastered the look of any creature jumping, or any creature or object falling by use of CGI… unless it’s in slow motion.

The fights within The Battle of The Five Armies are full of spectacular stunts, epic Orc beheadings and a few, “Well, damn it all!” moments when a hero falls. Still, they tend to drag unnecessarily, and allow for waning interest, suggesting that audience members should get comfortable and recline, as opposed to come to the end of a seat with nail-biting anticipation.

Ultimately, it’s still an enjoyable ride, and delivers an audience to the front doorstep of the LOTR film triology. Jackson was quite thoughtful in how he threaded the two adventures together, and The Battle of The Five Armies will likely send fans home with a desire to pop The Fellowship of The Ring into the old BD/DVD player for a continuation of the beloved world.

The Hobbit: Battle of The Five Armies, opens December 17, nationwide.