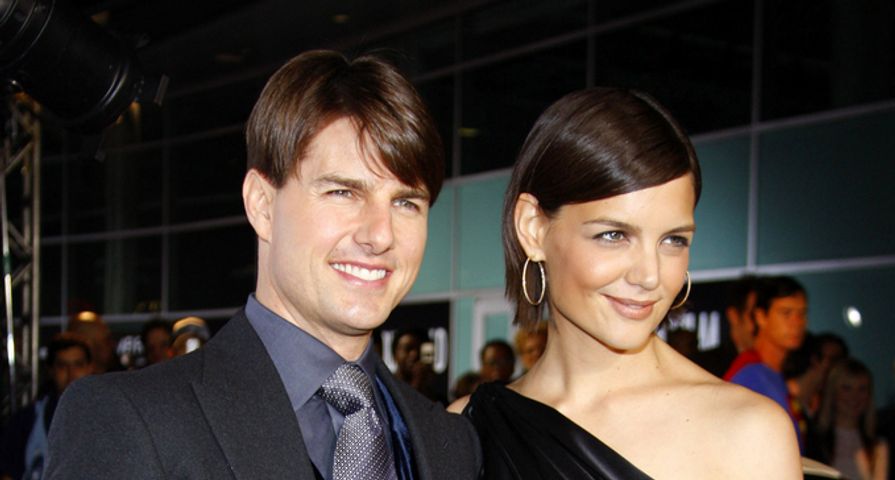 The marriage between Katie Holmes and Tom Cruise has to be one of the weirdest we’ve ever seen. From a relationship that appeared to move at the speed of light, to their erratic behavior in front of the cameras, we can’t say we were surprised when TomKat’s marriage came to an end. We’ve made a list of 10 things you may not have known about their relationship.

Tom and Katie’s relationship moved incredibly fast. In 2004, Katie told Seventeen, “I think every little girl dreams about (her wedding). I used to think I was going to marry Tom Cruise.” He was also a fan of hers. According to him, he admired the work she did in Dawson’s Creek and in film. In April 2005, they finally met when he invited her to L.A. to meet about a possible role in Mission: Impossible 3. She didn’t get the role, but she got the guy!

Only a month after meeting, Cruise made his famous appearance on Oprah where he confessed his love for Katie. “I’m in love! I’m in love,” Cruise exclaimed while jumping on Oprah’s couch. “I can’t be cool. I can’t be laid-back. It’s something that has happened, and I feel I want to celebrate it. I want to celebrate her. She’s a very special woman.” In a poll by People, 63 percent of readers thought Cruise’s behavior was a publicity stunt. Even Oprah admitted that Cruise was acting bizarrely.

According to Tom and Katie, it was love at first. “I fell for him from the minute that I shook his hand for the first time,” she told Harper’s Bazaar. “Tom makes me feel like the most beautiful woman in the world.” According to Tom, he loved Katie from “the moment he met her.” “I’m a romantic. I like doing things like creating romantic dinners, and she enjoys that. I don’t know what to say – I’m just happy, and I have been since the moment I met her. What we have is very special,” he told Playboy. He knew he wanted to marry her after their first date. “As a young girl, Kate said she dreamed of marrying me. And I said I wouldn’t want to disappoint her. I knew I wanted to marry Kate when I met her. After our very first date, I was sure. So I bought the ring shortly after that first date. At one point, I thought she was going to ask me to marry her first and I put her off by changing the subject. I wanted to ask her,” he told T Magazine.

Before she began dating Tom, the Dawson’s Creek actress had said that she was planning to remain a virgin until her honeymoon, but that obviously changed when she met the Oscar-nominated actor. In October 2006, less than six months after going public with their relationship, the couple announced that they were expecting. In April 2006, she gave birth to Suri.

They were married on November 18, 2006, at Odescalchi Castle in Italy. The couple went to great lengths to have a lavish wedding ceremony. Katie’s dress was designed by Georgio Armani, and her veil took more than 70 hours to make. Several celebrities were in attendance including Jim Carrey, Jennifer Lopez, Marc Anthony, Kristie Alley and John Travolta. Their daughter Suri was also in attendance, having been born earlier that year on April 18, 2006. The evening ended with an extravagant fireworks display.

10. Waiting At The Altar

Despite being a luxurious wedding, not everything went as planned. Leah Remini’s tell-all memoir, Troublemaker: Surviving Hollywood and Scientology, talks about the awkward moments at the couple’s wedding. After Tom took his place at the altar, Remini says he was left standing there “for the next twenty minutes (but what seemed like an eternity)” and tried to maintain “that everything-is-great look plastered on his face even as the crowd grew uncomfortable.” Remini sat next to her friend, Jennifer Lopez, who asked her, “Do you think Katie is coming?”

9. He Performed a Song from Top Gun at the Wedding

At their wedding, the actor performed The Righteous Brothers’ “You’ve Lost That Lovin’ Feeling” to his bride. Some found this strange seeing as the song is about a failed relationship, but Katie was completely touched by Cruise serenading her, according to Leah Remini.

In 1986, Tom Cruise joined the Church of Scientology. He was 24. The actor claimed the religion’s study methods helped him to come over his dyslexia and have a successful career. Since this time, his relationships have been greatly affected and controlled by the Church. Katie was heavily influenced by Cruise, and converted from Catholicism to the Church of Scientology after less than 2 months of dating, but she left after she filed for divorce from Cruise.

According to Vanity Fair, Katie and Tom never lived alone. They were closely monitored by an entourage from the Church of Scientology. In addition, Katie distanced herself from her good friends, and fired her agent, manager, and publicist. Katie was also assigned a chaperone, Jessica Rodriguez, who was referred to as her “best friend.” In 2005, Rodriguez attended Katie’s interview with W, and took over the conversation in an attempt to deflect attention away from Cruise’s involvement with Scientology.

6. He Didn’t Call Her Katie

When the two began dating in 2005, the Top Gun actor made a point of calling her “Kate” instead of “Katie.” “Katie is a young girl’s name. Her name is Kate now – she’s a child-bearing woman,” he said during an interview with All Headline News. Katie reportedly decided to start going by the name “Kate” after she discussed it with Tom.

After 7 years together, the couple divorced in August 2012. Holmes initiated the split that reportedly left Cruise blindsided. Just a month prior to the news of the divorce, Cruise gushed about his relationship with Holmes. He told Playboy, “I’m just so happy, and I have been since the moment I met her. What we have is very special.” Several reports say that Katie went about the divorce plans secretly, like using a disposable mobile phone to contact lawyers from 3 different firms in 3 separate states. There’s also claims that she leased a secret apartment in order to keep her daughter Suri safe from Scientologists. Cruise was away in Iceland at the time and was working on the film Oblivion.

According to a report from Gawker, Katie had a solid prenuptial agreement that enabled her to get out of her marriage with Tom quickly. Katie’s father is a lawyer and ensured that the agreement was detailed and comprehensive. Vanity Fair claimed the agreement “filled five banker’s boxes.” As part of the agreement, Katie will receive $400,000 a year until Suri turns 18 years old, plus medical and educational expenses for their daughter. In return, Katie has stayed quiet about Scientology since their divorce.

Prior to her marriage to Cruise, Holmes was on her way to becoming a successful actress. In 2005, she had roles in Batman Begins and Thank You for Smoking, both of which were box office successes. However, once she married Cruise, her career suddenly stalled. While she initially took a break from movies to raise Suri, once she came back, many of her films underperformed at the box office. There were rumors that Cruise had taken control of Holmes’ career during their marriage; however, she has since negated that.

In 2013, Tom Cruise pursued legal action against Bauer Publishing Company, which owns Life & Style and In Touch. Cruise challenged the company’s claim that he had “abandoned” his daughter after the divorce. While the defamation case was dropped later that year, some interesting details emerged about the private proceedings of Tom and Katie’s divorce. According to the deposition obtained by RadarOnline, Cruise admitted that Holmes had left him in order to protect their daughter from Scientology. When lawyers first asked him if this was true, the actor responded that he felt the question was “offensive,” and that “there is no need to protect my daughter from my religion.” When probed further as to whether or not Holmes had said she left to protect Suri, Cruise said, “Did she say that? That was one of the assertions, yes.”

While Katie has remained quiet about the specifics of her divorce from Tom, it’s clear it wasn’t one of the prouder moments of her life. In a 2014 with People the actress stated, “I don’t want that moment in my life to define me, to be who I am. I don’t want that to be what I’m known as. I was an actor before, an actor during and an actor now.” She has sole custody of Suri who, according to reports, has not seen or contacted her in more than three years.