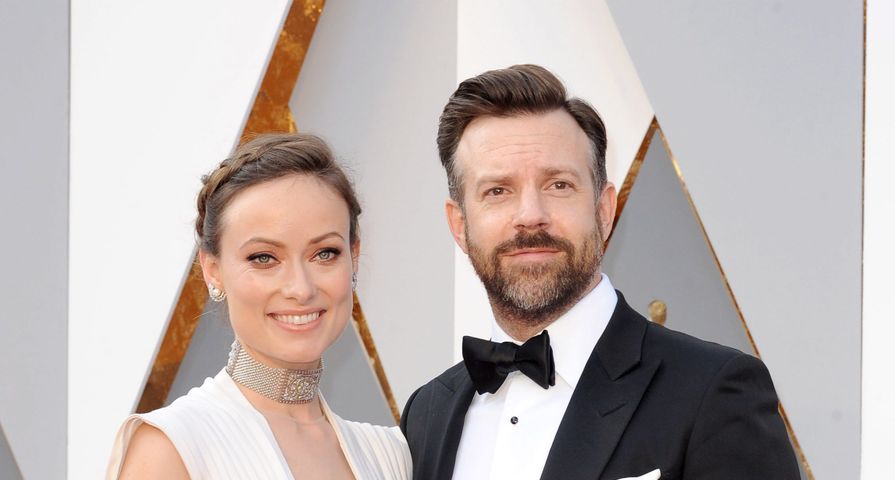 Olivia Wilde and Jason Sudeikis have one of the best relationships in Hollywood. Not only are they usually the cutest couple on the red carpet, they also say the sweetest things about each other. Their relationship is fairly unconventional in the sense that these two don’t need marriage to prove they are committed to one another because they already share two children together, a son named Otis who is now two-and-a-half-years-old, and a daughter named Daisy who is 6-months-old. Despite being in the public eye, there’s a lot we don’t know about them. Here’s a look at 10 things you probably didn’t know about Olivia Wilde and Jason Sudeikis’ relationship!

The story of how these two met isn’t exactly a tale of love at first sight, but there were definitely sparks! Olivia and Jason met at an after-party for an episode of Saturday Night Live back in 2011. Apparently, she looked a little bit lost at the party, so Sudeikis walked up to the Vinyl star and said, “Whatever you’re looking for, you don’t need it,” and walked away. While on The Howard Stern Show, Wilde said: “He was like really cool. He played it really cool.”

Despite being a beautiful and successful actress, Wilde admitted in an interview with Marie Claire that she didn’t think he’d be interested in her. “I thought, ‘He won’t be interested in me; I’m not a contender. He was so cool, so funny — I was such a fan of his and had always fancied his speed and his intelligence. He’s a brilliant actor with a brain like lightning,” she said. Luckily her friend, fellow actress Megalyn Echikunwoke, had more than enough faith because she told Wilde, “‘You’re going to end up marrying him.’ She knew long before I knew. It was just timing.”

8. She Made the First Move

Jason Sudeikis wasn’t especially forward with Wilde. In fact, she was the one who had to pursue him! After they first met at the SNL party, they kept running into each other. “I met Jason, and I thought he was so charming. He’s a great dancer and I’m a sucker for great dancers. But he didn’t even get my number. Over the next six months we kept running into each other. [One night], my best guy friend walked up to him and said, ‘This is Olivia’s number. Use it.’ That was the beginning,” she said. But things continued to move slowly. “When he got my number he didn’t text me for a month,” she said.

Not only did things move slow when it came to getting these two talking, he also didn’t kiss her until they had been on about four dates. “He literally didn’t kiss me until the fourth date. He finally kissed me and I was completely head over heels,” she said. Looking back now, she’s so happy her now fiance took things slowly. “I’m a lady so I left. I was like got the kiss gotta leave now. This is when you gotta get out,” said Wilde, who also admitted she wanted to get him back for playing hard to get in the beginning. “Two can play at this game,” she joked.

In an interview with Marie Claire in 2013, Wilde revealed that Sudeikis and her were both seeing other people when they first met at the Saturday Night Live party back in 2011. This is probably why, despite their immediate chemistry, it took some time to get their relationship off the ground. “I was just learning to be myself; I’d been divorced nine months. We were both seeing people but were single. He seemed to really see me, see through the bullshit. He said very few words and couldn’t keep eye contact,” she said.

Their first date went down in New York City, which is where they now share a home together in Brooklyn. “I felt like fresh meat at the market…I thought, ‘I’m not beautiful enough or his type.’ I couldn’t wait to sit down and hear him talk. Our first date, in New York City, we closed the restaurant down at 2 a.m.! He didn’t kiss me, and I was madly in love. I was overwhelmed,” she said.

4. Seriously Committed to One Another

When talking to either Jason or Olivia, the question of marriage and wedding plans are always a hot topic, but Wilde has made it clear she and Jason don’t need a piece of paper to feel committed to one another considering they’ve been dating for the past six years, engaged since January 2013, and now share two children together, Otis, 2 1/2 and 6-month old Daisy. “We are seriously connected. Before you have a child, marriage is the ultimate commitment and promise to one another, and then once you have a child, it’s like, ‘Oh, we’re committed and promised already,” she said in an interview with The EDIT.

3. What Attracted Her to Jason

Wilde has stated that she started falling for Jason’s charming personality immediately after she met him. But when asked what attracted her most to the Horrible Bosses actor, her response was this: “He was never overly flirtatious. He had patience and sincerity and kindness. No presumptuousness. He didn’t ever exhibit any signs of sh-ttiness; he was always considerate.”

2. When They’ll Tie the Knot

Last year at the Golden Globes, Olivia referred to Jason as her “husband,” and it sparked a lot of suspicion about whether the two had already secretly tied the knot. But when Entertainment Tonight asked her about it she said, “No, not technically, not if you checked the law books,” she said. “Or our moms,” chimed Sudeikis. It seems we probably shouldn’t hold our breath while we wait for them to get hitched cause in April 2016, Sudeikis joked that they wouldn’t get married “until weed is legal in every state.”

A quick glance at Jason and Olivia proves these two are head over heels for each other, and their role as parents has only brought them closer. When People asked Sudeikis what his proudest parenting moment was so far, he gave all the credit to his fiancee. “Just doing it with the right person. When I look at Olivia and the way that she pulls off all these things — it’s gonna be easy for him to grow up in a house of love and respect because I feel that way about his mom,” said Sudeikis. So sweet! On the other hand, when recounting his most embarrassing moment as a parent, he said that is yet to come, but when it does, “I anticipate it and it will be great and I hope it’s captured by professional street photographers.”