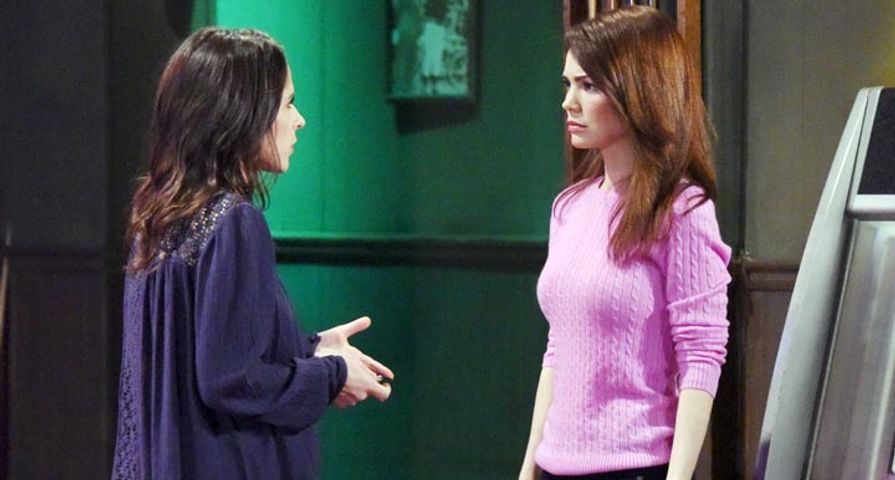 It’s the week of Valentine’s Day … but is love in air at General Hospital (GH)? It seems that Port Charles residents are more preoccupied with gaining revenge and plotting schemes at this point than anything romantic. Learn more about the fates of Ava, Julian, Sam, Sonny, Lulu, Valentine, and more in the GH spoilers for the week of February 13th.

It seems like the wrong blonde Jerome sister will be accused of a crime, when Ava is charged for the car bomb explosion that took Morgan’s life this week. Jason has pictures of Julian talking to a blonde and referring to his sister in recordings and the police put two and two together and will take Ava into the station. Good news for Ava, Scotty will be by her side throughout the entire ordeal. Bad news is, Julian will try and strike up a deal with other blonde sister (the one really responsible for Morgan’s death), Liv, with no luck. Liv has revenge on the brain and seems to be outsmarting Julian every step of the way.

4. Nathan Is Stuck In The Middle

Valentin is mad this week that Lulu once again traumatized little Charlotte at Crimson. However, worse than this is the fact that poor Nathan will placed in the middle of a bad situation between wife Maxie and sister Nina. Maxie is upset that she’s been fired, but Nina is upset that Maxie went behind her back to organize a visitation between Charlotte and Lulu without her knowledge. Spoilers indicate that Nathan may have to turn into peacemaker in this situation, but the bigger question is will Maxie get her job back?

Liz is not letting go of this nurses getting a pay cut deal and will be at the head of the fight against sister Hayden. Speaking of fight, Franco is caught off guard when he realizes that his dark side might be creeping up again. Liz turns to Sam for help. Meanwhile Dr. Griffin notices strange behavior in Hayden’s boyfriend Hamilton Finn. Finn’s behavior gets crazier this week as the good doctor is in need of another drug fix. Griffin wonders if Finn’s addiction will just end up causing Hayden more problems in the long run.

Sonny is onto Nelle’s innocent act and calls her on it this week. Things will be harder for Nelle to hide and scheme now that Sonny is on to her and he is off of house arrest. Meanwhile, Felicia continues to dig into Nelle’s past and is close to uncovering what she is hiding. Michael still wants to get close to Nelle, but she’s too preoccupied with her scheming. Spoilers indicate that Michael will have to make a hard decision this Valentine’s Day week.

Curtis will be in danger. Anna is not feeling good and turns to GH for help, but her condition worsens. Anna looks for answers, but also has someone stalking her … could it be Liv? Dillon and Kiki share a nice moment this week as Dillon surprises her. Ned thinks about life-changes as he stands up for Olivia (Falconeri).