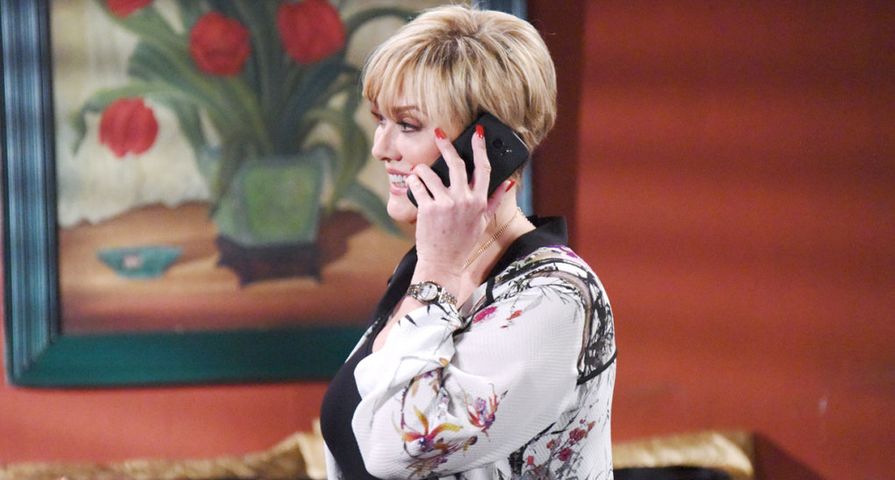 Who else wants to figure out what Liv is up to? Seems General Hospital (GH) fans will find out this week! Oddly enough, Griffin and Franco get pulled into Jerome’s wicked storyline, plus there is more drama around the Cassadines and Charlotte, as well as Nelle and the Corinthos family. Learn about these plotlines and more in the below GH spoilers for the week of March 6.

Ready to learn about what Liv’s revenge plan is really about? You’ll find out this week, but not before a new plot is unraveled where Griffin gets pulled into it all, as he has no clue who the blonde is. Griffin will not only be in danger, but he also sacrifices himself for the cause as the week wears on.

Julian is able to escape Liv and gets some help from Liz. He also gets a medical check up, but gets asked a ton of questions when Jordan shows up. She grills him on what his sister is up to, meanwhile another sister of his gets released from jail (Ava). While daughter Kiki forgives her, as she is not the one who killed Morgan, one has to wonder if Ava will ever fess up to the meds swap incident and her involvement. Even in soaps, the truth always comes out …

4. Franco Figures It Out?

Franco gets thrown into the Liv drama when he becomes a janitor at the hospital. He finds something weird while cleaning up … the reason why Liv is so hung up on the hospital and what is underneath it! Meanwhile, Liv is taking it up a notch when it comes to revenge, and is quite close to killing Anna. Anna is terrified to see this evil blast from the past, face to face. It seems that Liv might be close to getting the revenge she wants and she’ll use Ava for the final trap. Meanwhile, Jordan is on her toes this week trying to nab Liv and she falls into danger.

Sam does wake up from her coma, only for the couple to get some bad news. Alexis is quite upset over her daughter’s injuries … so much so, she claims she is ‘done’ with Julian for good. Sam and Alexis have a chat about Liv. As the week goes on, Jason puts his life on the line to protect Sam and his kids. Will Jason be the one to stop Liv?

Finn struggles this week with his addiction, as well as blackmailing. The drama starts when Brad learns that Finn’s patent was sold and that the good doctor gave the money to the hospital. Brad will be quite upset this week at the fact that he won’t see a dime of those profits. Sadly though, Finn has bigger fish to fry. His drug addiction continues to heighten and he could lose everything.

More drama with this family as Carly demands the entire story around Nelle. Michael ends up listening to the recording and Nelle confesses, showing the rattle and explaining her side of everything. Coming clean makes things a tad complicated, as Michael leaves the situation feeling sorry for Nelle, but questions Sonny’s actions in it all. A lot going on this week for Sonny and Carly. While Carly is upset, the two also need to be there for JaSam this week. Michael is also confused by Nelle. Speaking of family, its custody case time for the Cassadines! Valentin meets with big-time lawyer, Nora Buchanan (One Life to Live fans might be excited to see an old friend) and they talk about his case. Additionally, Nina and Laura sort out a deal.