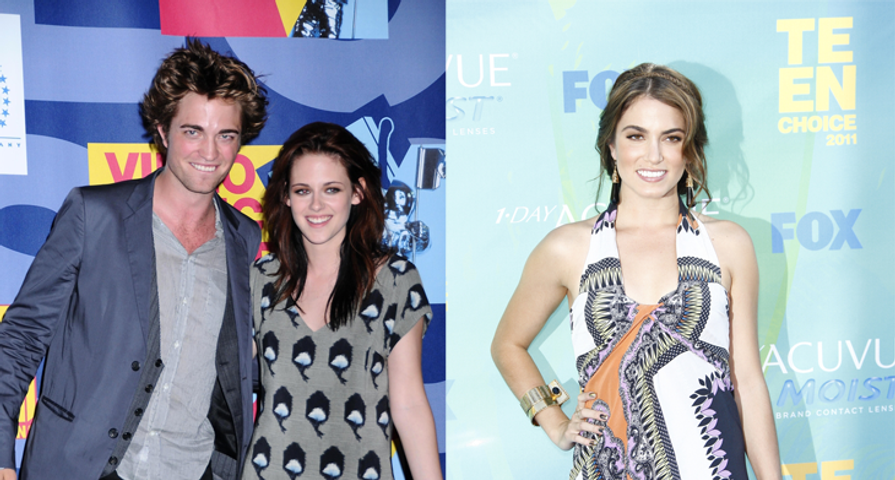 Love in Hollywood can be a complicated thing. Just when you think things can’t any more dysfunctional, love triangles suddenly appear. Maybe the media creates these parties of three and we just buy into or maybe they really do exist. Either way, we can’t seem to get enough of them! Two people can only produce a certain amount of drama; however, when a third person enters the picture, things suddenly get scandalous. Everyone loves a good scandal, including us. We’ve decided to round up a list of some of Hollywood’s most famous love triangles. Some of them have definitely been forgotten while others are the stuff legends are made of!

Jennifer Aniston and Brad have been over for a decade now. He totally moved on with Angelina Jolie while the former “Friends” actress is now happily engaged to Justin Theroux. In spite of this, the tabloids can’t seem to let the Aniston, Pitt and Jolie love triangle die. Aniston has definitely fed into it. She’s said in interviews that she doesn’t think it was cool of her supposed arch nemesis to talk about her and Pitt falling in love while she was still married to him. She’s got a good point.

The situation gets a lot more confusing when other people get involved and talk smack about the actress-director. Whenever Chelsea Handler goes on one of her “Angelina Jolie sucks” tirades, people automatically look at the “Cake” star and think she is involved somehow, which may or may not be true. We think that this is one love triangle that will be around for years to come, even if Aniston does marry Theroux.

Chris Brown is quite the player and Rihanna and Karrueche Tran can’t help but keep going back to get played again. We all remember when he first hooked up with the world famous singer. Those two were considered one of Hollywood’s cutest couples – until he beat her unconscious on the night before the Grammy’s. While they tried to make another go at things immediately after the scandal, they were forced to go their separate ways because of all of the bad publicity.

After the breakup, Brown started shacking up with Tran, an aspiring model. Even though he seemed happy with his new gf, he kept hooking up with Rihanna as well. Eventually he dumped Tran and got back together with the “Umbrella” singer. As expected, it didn’t last. As soon as he and Rihanna were finished Brown went back his ex and these two have continued to do the whole on-again, off-again thing.

There’s nothing better than a pre-teen love triangle! When Hilary Duff was a young teenager, she was dating Aaron Carter, the younger brother of Back Street Boys’ member Nick Carter. He was a pretty big deal at the time and a budding player. During his relationship with Duff, he dumped her for Lindsay Lohan because he was bored. Things with the fiery young redhead didn’t end up being that much better, so he dumped her and rekindled his relationship with the “Lizzie McGuire” star. Lohan didn’t take it so well and she became mortal enemies with her perceived rival.

Getting back together with Aaron was definitely not one of Duff’s better ideas. He ended up cheating on her with one of her good friends, which ended their relationship for good. Even if Duff and Lohan were never friends, it wasn’t really worth it for them to become enemies over Aaron Carter.

Bridget Moynahan, Tom Brady and Gisele Bundchen were, at one point, considered one of Hollywood’s more dramatic love triangles. The situation was the perfect breeding ground for gossip. Moynahan and Brady had dated for a few years and then broke up. He quickly hooked up with Bundchen. Things were getting serious between these two when his ex announced that she was pregnant with his child. None of them have ever confirmed anything about the alleged tension between them, but it’s obvious that it is there.

In the past, Moynahan has alluded to being upset that she has had to go through her pregnancy and raising her son, Jack, alone. “When you’re suddenly pregnant and no one is standing by your side, even if you’re in your 30s, it’s a hard conversation. I’m a traditional girl, and I believe in marriage, and I just always thought that’s the way I’d be doing this,” she told Harper’s Bazaar back in 2008. “For a moment, it was hard for me to accept that this was the way I was going to have a family.”

Heather Locklear and Richie Sambora had been married for 12-years when she left him after finding an inappropriate email in his inbox from a mutual acquaintance of theirs. Shortly after they called it quits, her good friend Denise Richards, who had recently separated from her husband-at-the-time Charlie Sheen, started seeing the now single rock star. This did not go over well with the former “Melrose Place” star.

Lucky for her, Richie’s relationship with Richards didn’t last the first time around, nor did it last when they decided to rekindle things in 2012. According to the former Bond girl, she and the Bon Jovi rocker will be friends forever. She can’t really say the same about her friendship with his ex wife though. Things were never the same between the two. We’re not sure how Locklear would ever trust her friend again given how Richards went behind her back to begin with. With friends like that who needs enemies!

Sienna Miller and Jude Law had a pretty tempestuous relationship. Even though they were engaged, things with them always seemed to go from bad to worse. In 2005, things came completely undone when news of his affair with his children’s nanny hit the tabloids. Miller didn’t take it so well. Even though she chose to get back together with her cheating fiancé, she decided to start an affair of her own – reportedly with Daniel Craig, who was a good friend of Law’s and her co-star from “Layer Cake.”

When Miller and Craig started hooking up on the down low, he wasn’t exactly single. He was in a relationship with Satsuki Mitchell. Law eventually found out about the affair and broke them up. This love triangle was only confirmed last year during the News of the World phone hacking trial, although there were rumors of a possible affair between Miller and Craig floating around in 2005.

The “Twilight” set had a lot more going on than many of us we were aware of. Before Robert Pattinson and Kristen Stewart were ever a thing, he was reportedly hooking up with his other co-star from the series, Nikki Reed. This was way back in 2009. K-Stew was dating Michael Angarano at the time and didn’t seem overly interested in R-Pattz. He allegedly pursued her even though he was already with Reed. Eventually he was able to win over Stewart, which made things pretty awkward on set. Reed and Stewart were actually friends before Pattinson started pursuing both of them at the same time.

None of these three are friends anymore. After getting their co-star out of the picture, K-Stew and R-Pattz were monogamous for a while. That all changed when she began an illicit affair with a married man – her director from “Snow White and the Huntsman.” While Stewart and Pattinson were able to get back together for promotion of the final “Twilight film,” after it finished they called it quits.