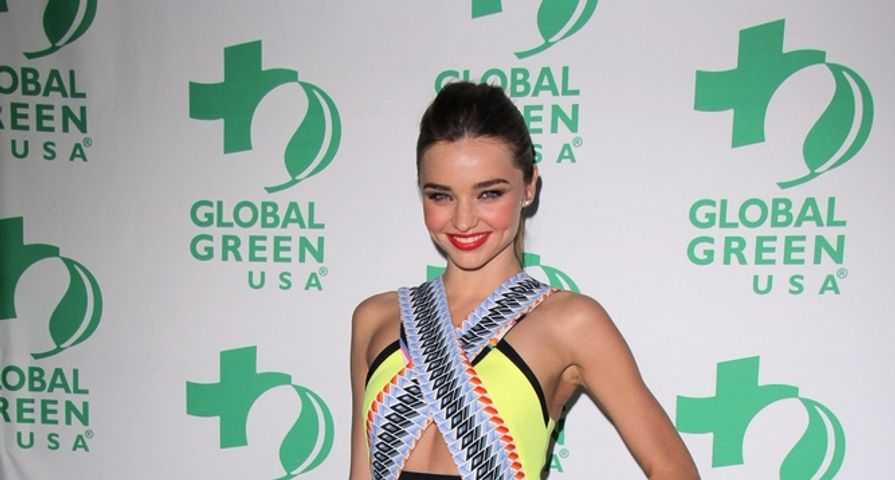 Miranda Kerr hasn’t been in Hollywood that long. In a short amount of time, however, she has managed to establish herself as one of the more successful models and as one of the more stylish celebrities. In 2007, she became internationally known when she was offered a contract with Victoria’s Secret to replace Gisele Bundchen. Kerr did that and more. She has become the face of some of the world’s biggest fashion and beauty brands, including Mango and Swarovski, and she is currently one of the world’s highest paid models. Check out the photos below and watch Miranda evolve from a casual cutie to a fabulous fashionista!

Miranda made an appearance at Verizon’s launch of the new Blackberry Pearl 8130 Smartphone wearing little to no makeup and one of the most laid back outfits ever. The Australian supermodel is almost unrecognizable; however, at this point, she had already secured a lucrative contract with Victoria’s Secret and she also nabbed one of Hollywood’s hottest bachelors – Orlando Bloom. Big things are ahead for this model and her fashion will change accordingly.

Miranda Kerr – who was starting to make a name for herself as a Victoria’s Secret model – looked stunning at the Victoria’s Secret Launch event. She showed off her killer figure in a seafoam draped sheath dress by Balenciaga with leg lengthening nude peep toe pumps. Kerr was at the event to help launch a beauty line – Heavenly Bloom – from PINK, a sub brand of Victoria’s Secret geared towards high school students and college undergraduates.

The Victoria’s Secret model was easily one of the best dressed celebrities at the 2009 ESPY Awards. She glowed in this white, floor-grazing Calvin Klein halter dress, which showed off her back and her toned arms. The one accessory she didn’t bring was her adorable boyfriend Orlando Bloom. Kerr was already establishing herself as one of the world’s most successful models. She ranked ninth on Forbes 2009 list of the world’s highest paid models, with an estimated earnings of $3 million.

The Victoria’s Secret Angel looked great in this emerald green Dior halter dress with nude peep toe pumps at the Victoria’s Secret party for the 15th anniversary of the Swim Catalogue. While the length of this dress would make most other people – celebrities included – look like they forgot to put on their pants, Kerr looks every bit the supermodel. She has a body most women would kill for and she knows exactly how to style it.

Victoria’s Secret Celebrates the Reveal of the 2010 “What is Sexy?” List

Miranda Kerr was the epitome of sexy in this strapless black leather Roberto Cavalli mini dress with crystal details. It obvious why she is becoming one of the most successful models in the world – she has one of the best figures in the business with a beautiful face to boot. In 2010, Kerr’s career reached new heights. She walked the runway for high fashion brands like Balenciaga and Prada and she also modeled in campaigns for Prada and Jil Sander.

Victoria’s Secret Release of the 2011 “What Is Sexy?” List

Kerr seems to really like strapless dresses and, if we had her figure, we would too. She attended the Victoria’s Secret release party for the 2011 “What Is Sexy” in this strapless Herve Leger dress. It really shows off her amazing figure. Even though she recently gave birth to her son Flynn, she seemed to have no problem bouncing right back into shape. To look that good that consistently can mean only one thing – great genetics.

The Victoria’s Secret model attended Paul McCartney’s L.A. party for the world premiere of his video “My Valentine.” The party was co-hosted by his wife Nancy and his daughter Stella. The video featured cameos from Natalie Portman and Johnny Depp. Kerr dressed to the nines for the party. She wore this little black dress designed by Stella McCartney that featured mesh panels on the left side. Kerr accessorized with black pumps and a faux python clutch.

Miranda Kerr showed up a Golden Globes after party with her hubby, Orlando Bloom. She looked beautiful in this baby-blue crystal-embellished dress with a floral pattern. She accessorized with Giuseppe Zanotti crystal sandals and a matching champagne-colour satin clutch. Even though she and Bloom had only been married for a couple of years at this point – and had had little Flynn for a year – they were regularly facing break up rumors in the media.

The former Victoria’s Secret model looked amazing in a sleeveless crisscross Peter Pilotto “Bianca” dress, Christian Louboutin shoes and Charriol jewelry at the Global Green USA’s Pre-Oscar Party. This is definitely one of Kerr’s best looks yet. The colors, patterns and cut on this dress are fantastic. She and Orlando bloom were rumored to be breaking up around this time and it looks like Kerr brought him to the event to silence the couple’s critics.

Miranda looked exquisitely beautiful at the Jaguar F-TYPE Coupe Global Debut in this David Koma dress, Christian Louboutin shoes, Shylee Rose jewels and Smythson clutch. Kerr and Orlando Bloom had recently announced that they had split after only three years of marriage. Rumors about a possible hook up between the supermodel and Leonardo DiCaprio – who clearly has a thing for models – were running rampant.