We Weigh In: Are Constant Cast Exits Ruining Days Of Our Lives? 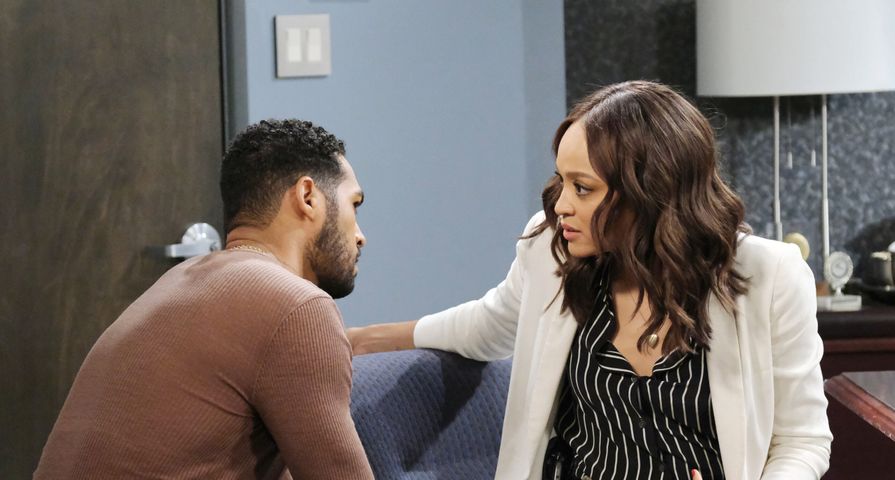 Nothing is solid or predictable in the world of Days Of Our Lives (DOOL). Viewers expect as much from the storylines on screen, but the action seems just as chaotic behind the camera. Why is the DOOL cast in such upheaval? The common thread appears to be inflexible contracts.

With the exception of Wilson, who merely switched characters, the actors have departed the NBC soap with a mix of surprise, dismay and in one case, anger.

Want DOOL spoilers? Check out Days Of Our Lives Spoilers For The Week (July 25, 2022)

“It did surprise me,” Lucas Adams told Soap Opera Digest (SOD) of his character’s departure, “because we just had that whole storyline of Tripp dying and being brought back.”

Marci Miller was also taken aback by her exit, as her character met a violent demise. “I don’t love that they made the choice that they did,” she told SOD. “She’s a legacy character. She’s been there forever.”

Miller also revealed that DOOL producers extended an offer for her to return to the soap – despite her character being axed. And tellingly, Miller wasn’t that keen on it. “We’ll see. It depends on what’s going on in my life,” Miller added. “I never say never, but I’m not planning to come back next year.”

If Miller sounds unenthusiastic, co-stars Sal Stowers and Victoria Konefal (who both made the choice to abandon ship) have echoed a similar fatigue. Admitting that she had been thinking about leaving the soap “for a while”, Stowers explained her rationale to SOD as follows: “As an artist, there just comes a time when you want to try to see what else you’re capable of doing.”

It’s likely that Stowers’ remarks say more about the demanding world of daytime television than DOOL specifically. However, the NBC soap’s approach to contracts – which is always a hush-hush issue – has been critiqued by many of the outgoing stars.

Stowers chose not to elaborate on the constraints of her contract, but Konefal and Archey have been more outspoken regarding DOOL’s tactics. “They wanted to lock me down on contract because they didn’t want to lose me,” Konefal explained in 2021. “Because God forbid I book something else.”

Want DOOL plotline predictions? Check out Days Of Our Lives Plotline Predictions For The Next Two Weeks (July 18 – 29, 2022)

A few months later, Konefal sounded off about her desire to pull away from the soap. “[They] wanted me back for another year. I was like, ‘Hey, I can’t do it. I did quit for a reason,’” she explained during an appearance on Not Too Deep with Grace Helbig. “My artistic integrity was no longer being fulfilled.”

Another actor who isn’t pulling his punches when it comes to criticizing DOOL’s contract methods is Lamon Archey. “I didn’t want to do a contract anymore,” the actor told SOD. “I was down to do recurring, but I just didn’t want to be tied down and not have the freedom to pursue other jobs, play other characters.”

“It’s something [DOOL] couldn’t deal with, and I got that,” Archey added, referring to his dismissal as “a blessing in disguise”.

All of the actors have expressed gratitude to the soap and shared fond memories of their years on set. They’ve also acknowledged that DOOL is a safety net, since the possibility of reprising their roles is likely, either for the NBC program or Peacock’s spin-off Beyond Salem. But knowing that the same contract restrictions would await their return might render the option a bitter pill for actors to swallow.

Want more DOOL spoilers? Check out Days Of Our Lives Spoilers For The Next Two Weeks (July 25 – August 5, 2022)

Archey acknowledged that managing a daytime drama without these restrictive contracts is difficult. “Days was in a position where every time they had an episode, they had to reach out to my agent to see if I was available,” the actor explained. “They didn’t want to worry about if I was available; they had to move on.”

Clearly that dilemma is happening frequently at DOOL, since a sizeable portion of the cast no longer works there. Unless the soap addresses the nature of its contracts, the problem will continue to diminish the soap’s pool of acting talent. “They need working actors who can come in when they need them,” Archey surmised.

As if that game of musical chairs isn’t enough, current DOOL spoilers for the week of July 25th note that the “Grim Reaper” will return to claim another soul. Not even a month removed from Abigail’s stabbing, fans are now wondering which character will perish next.

Since added teasers note that the DiMera family will be “rocked” by tragedy and that EJ will look to benefit from the situation, many viewers have concluded that Jake DiMera will be the next character axed from the show.

Does that mean Brandon Barash be the next DOOL actor without a chair when the music stops? Not so fast! The return of Dr. Rolf hints at the possibility that Stefan DiMera (also played in the past by Barash) will return from the afterlife. So, if the casting move is confirmed, Barash would mirror Robert Scott Wilson’s recent transition from Ben Weston to Alex Kiriakis.

No soap opera keeps us guessing more regularly than DOOL, and while that’s great for storytelling, it’s hard to see so many beloved actors go. When it comes to the talent, a little stability would be nice.